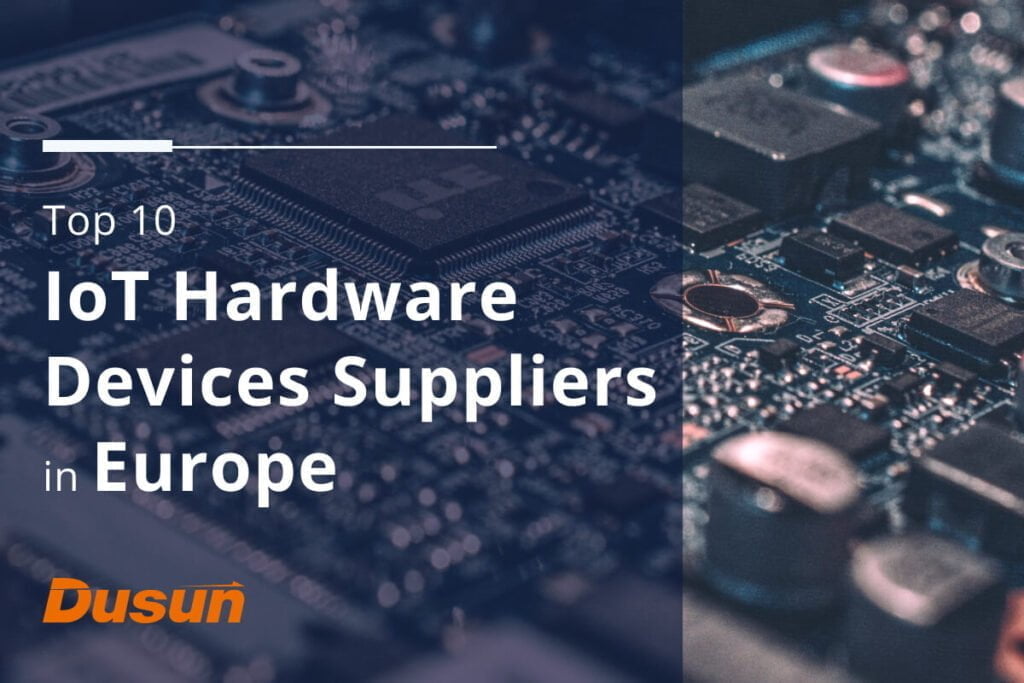 IoT hardware is taking the market by storm, and so are the companies backing it.

IoT is not now a foreign concept in this ever-growing world. What was once limited to home sensors has leaped into several industries and improved the standard of living as a whole. This is quite evident in European counties that have invested heavily in this space.

Take, for example, the recent CBI report, which estimates annual IoT sector growth in Europe to be close to 25 billion by the end of 2030. With that said, today, I will take you through some prominent IoT hardware suppliers in the EU and let you know what makes them the best in the business.

In the end, we will also discuss some factors which every IoT manufacturer should rely on in the future to benefit their customer base. So, without wasting much time, let’s get straight into the post!

Based on the technological output, scalability, integration, and market cap, IoT suppliers in Europe can be divided into the following list:

About this Company: Regarding improving system communications, Siemens is a widely discussed name. They are a leading IoT firm in Germany specializing in smart gateways and data analytics. Since 1857, they’ve seen significant growth in their business, and that’s all thanks to their state-of-the-art infrastructure. Siemens believes in innovation, and their cloud-based IoT services are changing how Europe operates, especially in the automation department.

About this Company: The next manufacturer on the list goes by Innowise Group. They provide leading services in IoT development and deployment. As a user, you can upgrade your home or firm by simply using their systems.

What is more, is the fact that they have a multitude of offices throughout Europe. So, whether you are living in East coast Germany or running your business near Italy, you can take advantage of their expertise.

About this Company: SumatoSoft is the newest contender in the IoT niche, specializing in hardware management and connectivity. You can enjoy comprehensive data analytics and web-based solutions with their state-of-the-art infrastructure.

They also offer consulting services for businesses looking to upscale to the cloud ecosystem. SumatoSoft has secured millions of dollars in revenue thanks to its rapid development.  Their offices are in 25+ countries, most of which are in the EU.

About this Company: Building future technologies require cutting-edge innovation, and that’s what ScienceSoft is all about. It plays a significant role in IoT manufacturing and automation, especially for industries like healthcare. They also support IoT Analytics and smart data processing so your appliance can always stay connected to the cloud.

Like most hardware suppliers, ScienceSoft was founded in the 90s and, until now, has significantly impacted the IoT ecosystem. This is why you will often see them among the top-ranking enterprises in Europe.

About this Company: Unlike ScienceSoft, SAP is a niche-specific IoT firm experienced in cloud-based systems. It offers cloud-based data plans to both consumer and business levels so they can transition to an all-around setup.

They also handle CRM management over various industries, such as Energy and power, and benefit the global economy as a whole. It’s headquartered in Germany, and its infrastructure comprises 10000+ employees.

About this Company: If you are looking for the best IoT vendor in the EU, then you can’t go wrong with Eurotech. They are a multimillion-dollar IoT firm that partakes in everything from boards/modules manufacturing to high-performance AI solutions. What is more, is the fact that they power many industrial projects on a global scale and provide value to the general consumer.

Additionally, Eurotech is a major player in running the AWS ecosystem. This gives this firm significant leverage over its competitors. Thanks to their leading pervasive computing, you can find their European stations.

About this Company: IntSpo is another name that leverages the IoT space. They have been in the industry for quite some time now and specialize in making security sensors and other physical tracking assets. IntSpo also has quite a reputation in 4G/5G development technologies, mainly because of its cutting-edge infrastructure.

They plan on providing high-efficiency IoT systems in the market, and so far, they haven’t let us down. I also love that IntSpo is a multinational brand so you will find their services outside of Europe.

About this Company: Like IntSpo, FloLIVE is a stellar IoT firm that handles global connectivity. They operate high-performance networks and bring about cellular communication. FloLIVE vision is to power cloud-native ecosystems and makes them accessible to the general audience.

They also have invested heavily in 5G technology, which means you can see its development in the coming years. FloLIVE is backed by industry leaders such as Dell and Qualcomm, so you know they are relevant. They also had partnerships with several mobile operators, which speaks for their growth itself.

About this Company: N-iX is a new player in IoT development, and you may have yet to hear about them. In a few words, they are experienced in maintaining and prototyping IoT systems, especially the software side of things. They also engineer low bandwidth networks such as WIFI over the cloud.

I also like that they offer their expertise to corporations in the form of Amazon Web Services and bring about innovation. With over 1000 employees, N-iX can give European Union the breakthrough in IoT they genuinely need.

About this Company: Finally, we have Actility, whose business model revolves around IoT communication to aid the automation sector. Since its launch in 2010, they have been commercializing IoT businesses and improving their accessibility. Actility future-proof sensors, as well as monitoring machines and allows farmers or factories to work more efficiently. It helps to connect IoT hardware and upgrade our standard of living.

Features of a Great IoT Manufacturer

IoT suppliers come in many forms, but those leading the industry often have something special to offer. So let’s look at some of the components that make an IoT provider successful in the long run. Some of these key evaluation points include;

The best IoT vendors are the ones with the utmost focus on the scalability of their systems. They should be compatible with a state-of-the-art architecture to bring about data analysis, product stability, and IoT digitalization. These suppliers should also hold regular maintenance protocols so you will avoid any compromises in your next project.

The IoT systems should be designed in such a way that it helps out every type of consumer. Its interface should be easy to adapt, so you don’t have to indulge in complex inputs to archive complete automation. Moreover, the technologies that the vendor use should also support smart tools, which in the end, will benefit the user.

Experience is subjective, but it should give us all a better picture of what to expect. This is why I advise my audience to rely only on IoT suppliers with previous milestones in the niche.

They should have expertise in handling IoT solutions, so there are no bandwidth or security limitations. On top of that, an experienced or qualified staff helps both you and your client to archive the best possible results.

All in all, this was my in-depth list of the top IoT hardware suppliers in Europe. Ultimately, IoT is changing the way we interact with our world.  From Healthcare to Energy, it has dramatically improved our lifestyle, and vendors like SumatoSoft and Eurotech played a crucial role in making all this possible. These companies are leading innovators in IoT solutions, and their services speak quality on every front. For further information, make sure to check my recent post on the top IoT suppliers in the US.

Quandeel
Quandeel is a tech-savvy Blog writer and Web content Specialist. With her expertise and experience in working with big tech websites, she’s known for her concise and easy-to-understand tech guides.