What Certifications and Compliance Do IoT Providers Need? 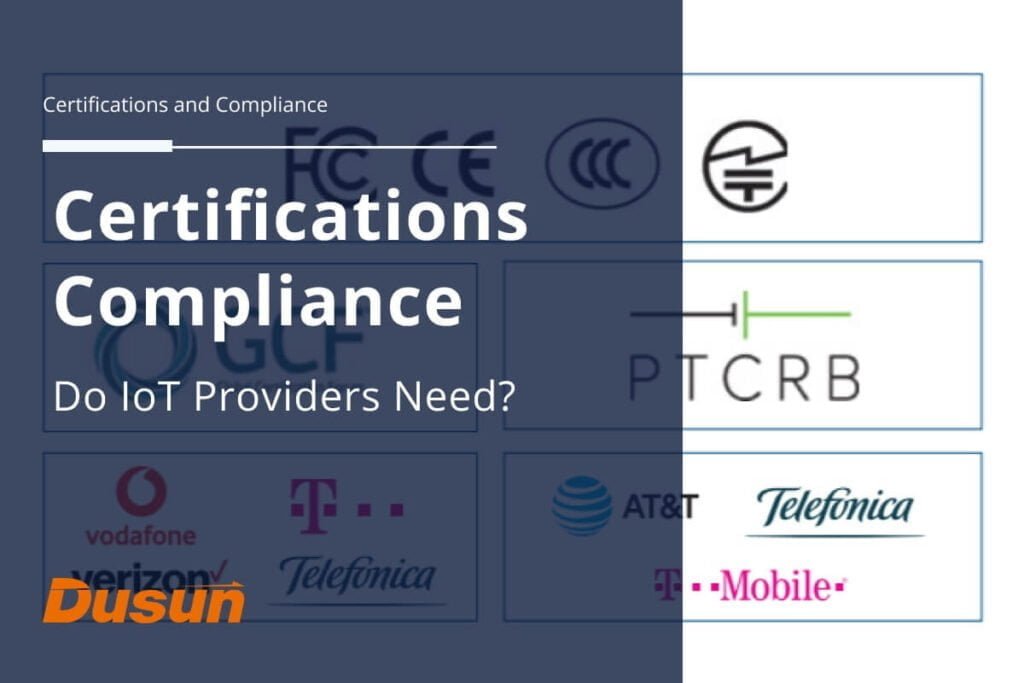 At first look, it is impossible to distinguish between facts and opinions in the field of IoT device certification. But the procedures are clearly laid out. IoT device designers just need to be aware of the laws and regulations that must be adhered to by all wireless communications devices in order to guarantee interoperability and safe and dependable operation.

Despite this, most newly created IoT devices continue to fail certification on the first try, which can have a significant influence on costs and time to market. So, what is the value of getting IoT certification? Which certificates are critical for IoT providers?

The value of IoT certifications

Poor certification processes for IoT devices can have serious time-to-market effects for vendors as well as severe legal and financial repercussions. Consumers can save a lot of time and effort on the follow-up IoT project by selecting an IoT product with the appropriate certification.

In order to help you ensure that your hardware complies with the necessary standards, I’ve provided a high-level overview of the laws you need to be aware of as a supplier, channel, and consumer.

Following are three unique sorts of certification requirements for IoT devices, each with an example:

Electronic products often need to have these certifications in order to be sold in a certain market. The IoT Device Host and/or IoT Device are both eligible for the certifications. The certifications typically show adherence to national standards. The IoT compliance standards may address safety concerns or ensure that RF emissions from the device do not interfere with that of other wireless devices.

Examples include RF transmitter and receiver tests, environmental testing, electrical safety, and electromagnetic compatibility (EMC). The gadget may need permission from several regulatory agencies, depending on its intended usage. It may be necessary to obtain numerous regulatory certifications, with each market having its own regulatory body and approval procedure, depending on the market(s) where the device is intended to be sold or utilized.

CE stands for Conformité Européenne, which is French meaning European conformance. CE certification is required for many products made or sold inside the European Economic Area (EEA). It is valid in 28 European Union member countries as well as five other countries, including Iceland, Norway, Liechtenstein, Turkey, and Switzerland.

Almost every electronic gadget, however, generates electromagnetic radiation accidentally as part of its operation. In the United States, any electrical product that oscillates at 9 kHz or greater requires FCC certification. In Europe, CISPR 22. is in charge of regulating RF/electromagnetic emissions.

Underwriters Laboratories grants UL certification to goods made in the US. Products that draw power from an electrical outlet are preferred to have this certification from a private American company. To receive UL certification, a product must also pass safety tests administered by testing facilities that are OSHA certified. The acronym for the Occupational Safety and Health Administration is OSHA.

The goal of RoHS is to reduce the number of hazardous chemicals used in electronics manufacture. It carefully restricts hazardous compounds such as lead, cadmium, and mercury used in the production of EEE, including screws and enclosures. RoHS certification is required for products sold in the EU and the state of California.

Zigbee is a popular wireless technology for IoT applications, with more than 100 million devices already installed. This low-power, IEEE 802.15.4-based wireless technology was created by the Zigbee Alliance for home automation products like thermostats, lighting fixtures, and motion detectors.

It is necessary to test IoT smart devices that use Zigbee technology to ensure that they adhere to the interoperability standard. Every platform and product must adhere to the specifications of Zigbee in order to be certified as compliant.

In most cases, these certificates are in addition to the regulatory certification and type approval that were previously described. These certifications examine the product’s functioning and whether it complies with predetermined industry standards using predetermined conformance test suites, which may involve field testing and interoperability testing.

Since both organizations use the same IoT system for mobile devices, neither GCF nor PTCRB currently has a separate certification process for IoT devices.

To become certified, IoT devices must undergo substantially less testing than smartphones because they are often less complicated than mobile devices. The schemes also permit certification of communication modules, which may be installed into an IoT device and allow test results to be reused.

As part of their acceptance or certification requirements, network operators frequently include one of the certification systems.

The PTCRB was established in 1997 with the aim of ensuring complete network compliance for all devices connected to North American mobile networks like AT&T, Verizon, and T-Mobile. Additionally, the PTCRB is tasked with advising organizations that create device standards, like the Alliance for Telecommunications Industry Solutions, on rules and regulations governing device testing.

measuring the erroneous emissions from a gadget. This makes that the gadget is using the right radio frequency and won’t disrupt other communications or send out unnecessary data.

Network operators typically conduct additional compatibility testing that is tailored to their network configuration and network parameter settings in addition to the Telecom Industry certification. While some operators could view these clearances as mandatory, others would view them as optional. Additional operator-specific testing might not always be necessary if the network operator accepts the results of Telecom Industry certification.

Depending on the needs of the network operator, this certification is applicable to IoT Device Hosts, IoT Devices and Communication Modules, and Radio Baseband Chipsets. It covers IoT security, Service Layer, and the Application Layer.

In order for the device to be used on a particular network or across several network operators, as well as to be marketed via the network operator channels as either manufacturer-branded or white-labeled products, operator-specific certification may be necessary.

Operator certification is often only required on the home network or the network that offers the cellular subscription for devices that will be roaming across various networks.

Whether they are used in the United States or while roaming on other countries’ networks, IoT devices must all be certified before they can be used on a mobile network. And AT&T certification has received approval for the entire device, not just for the processor, components, or antenna.

Certificates cost a lot of money

While obtaining certification is the best practice to guarantee the quality of IoT devices, the process costs a lot of money. Certification costs can have a major impact on equipment prices, particularly if you manufacture low-cost/low-volume equipment.

It can take 6 months (or longer) from the initial start due to overbooked labs being delayed by more than 3 months to find a place to run the tests, run the tests themselves, build the report, and possibly get final approval from the regulator. Discuss with the lab until legal permission to place your device on the market is obtained.

Choosing the equipment that has completed the certification ensures the quality of the equipment and saves the trouble of the project party applying for certification. DUSUN invests a lot of time and effort to ensure that smart devices comply with different certifications and work properly.