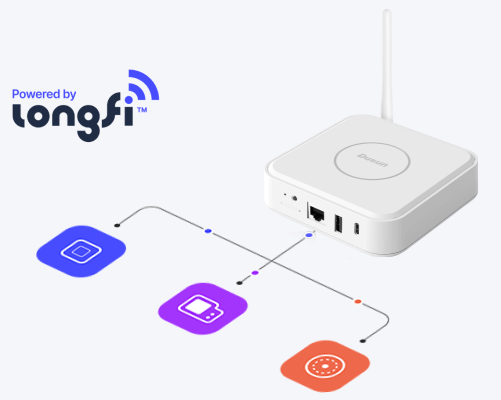 This is a Low Power, Wide Area (LPWA) networking protocol structured to wirelessly link battery-operated “things” to the internet in regional, federal, or worldwide network systems.

To give you more bits of information, did you know that LoRaWAN operates in the sub-gigahertz frequency bands and its specifications vary from region to region because of regulatory requirements?

Moreover, at the time of writing this tutorial, LoRaWAN specifications for Europe and North America were defined. Other regions like China, Korea, Japan, and India do not have final specifications as of now.

For Europe, LoRaWAN specifies different channels. Eight of them have multiple data rates ranging from 250 bps to 5.5 kbps. One channel with a frequency of 11 kbps and one FSK channel with something like a speed of 50 kbps can perform at greater data rates. The most power that can be used is +14dBM.

The edge devices in the EU433 spectrum employ a channel database schema that can accommodate at least 16 channels and function between 433.05 and 434.79 MHz. The very first three channels, which are the baseline channels and correlate to the frequencies 433.175, 433.375, and 433.575 MHz, cannot be changed using the NewChannelReq command.

The above three channels ensure that all systems’ end devices and gateways share a minimum number of common channels. On a network-by-network basis, additional channels may be freely disseminated over the permitted frequency range.

The EIRP of the radio device must be lower than 12.15 dBm for LoRaWAN to operate in the ETSI EU433 band, and the transmission activity of the end device must be less than 10%. The channels in this band’s central frequency vary from 433.175 to 434.665 MHz.

In the EU433 MHz band, the EN300220 ETSI framework allows for a maximum transmission duty-cycle of 10%. To prevent congestion in the network, LoRaWAN necessitates a transmit duty-cycle that is 1% lower than the permitted maximum.

Any area where the ISM wireless spectrum is specified by the ETSI 307 standard is eligible to use the EU863-870 band. The end devices in this spectrum will run between 863 and 870 MHz, and they will hold the information collected from at least 16 channels using a channel database structure. The operator may assign any number of channels to this band, but all EU863 end devices must include and implement the 3 standard channels, 868.10, 868.30, and 868.50. On a network-by-network basis, additional channels may be freely disseminated over the permitted frequency range.

Device manufacturers and designers utilizing the Microchip LoRaWAN module RN-2903A should load the right software from Microchip to ensure the devices operate effectively because Australia employs the 915 MHz to 928 MHz wireless network frequency spectrum. The maximum principal radiated isotropic power (EIRP) for the 915-928 MHz frequency range is 1 watt. Despite using the same frequency (915 MHz), the US actually has a wider range than Australia (902-928 MHz), and it is against the law to utilize the lower portion of the spectrum in Australia.

LoRaWan employs the RF 868MHz band, a common bandwidth for LPWANs in Europe. Various national and international conventions, such as the ERC-REC-70-3E in Europe, control this bandwidth. On January 30, 2015, ARCEP 2014-1263 in France looked to have been the final one to be recognized in the JO.

Since the development of wireless LANs, Bluetooth, and ZigBee, the 2.4-GHz frequency has received the majority of design attention in the United States. This kind of application or duty cycle is not constrained by FCC regulations in the 915-MHz ISM band, for instance. Additionally, compared to other regions of the ISM spectrum, the output power allowed by the standards is significantly larger.

The frequency range between 902 and 928 MHz has a central frequency of 915 MHz. The FCC permits an electric field value strength of 50 mV/m at this frequency at a three-meter distance from the broadcasting antenna.

The LoRa Alliance has designated the 864 to 869.2 MHz frequency band in Russia for the use of LoRa technology. The RU864-870 band’s edge devices utilize a stream database schema that can accommodate at least 8 streams and operate between 864 and 869.2 MHz.

The network administrator may arbitrarily assign network channels in the RU864–870 band in line with the subcarriers that the Russian rule defines. Nevertheless, any RU864–870 MHz end-device must support the two default channels, 868.9 and 869.1 MHz. Such default channels ensure a basic standard channel set across end devices and network gateways, and they cannot be changed using the NewChannelReq command.

On July 25, 2012, the 920 MHz band was officially designated as the ISM Frequency, and use of the new band began in Japan. Certain uses are permitted in the designated frequency band of the ISM Band, which represents the Industrial, Scientific, and Medical Band. WiFi, Bluetooth technology, cordless phones, radio controllers, and soon other devices will use the ISM band. But, because the base stations for sensor systems and telephones have distinct facility environments, transmission outputs, and other pertinent factors, the capabilities are not exactly the same. Additionally, it has also been emphasized that the 900 MHz spectrum is universal, which leads to confusion.

Frequency range is perhaps the most important factor to take into account. The permitted operational frequency for Lora in India is in the range of 865Mhz and 867Mhz. The Sentrius RG186, an 868Mhz variant of the gateway we present, can accommodate frequencies from 863Mhz to 870Mhz, which perfectly satisfies our needs. The quantity of channels is the next one. There should be at least two channels on a LoRaWAN gateway. The gateway contains five channels, allowing it to talk to five end nodes at once.

The National Spectrum Management Handbook explains how the International Table of Frequency Allocations, included in Article 5 of the Radio Regulations, serves as the foundation for national tables and, under certain nations, could serve as the national table itself. For radio-paging system subscriber-to-base broadcasts, the cellular service’s bands 917-923 MHz are set aside.

There are several aspects that are intended for you to take into consideration while choosing the right frequency. The information was organized to help in the development and assessment of LoRaWAN use cases.

For example, in network technologies, the range/distance, the information transmission speed, and the power consumption are fundamentally the three characteristics that can be used to describe a network.

These constraints are clearly defined by physics laws, making it difficult to give equal weight to all three parameters. For instance, LoRaWAN can transport information over distant locations and uses minimal power, but it only has a small data rate.

We can draw the conclusion that, in reality, only two of the aforementioned criteria can be optimized. Therefore, you must always pick which features are more important to you.

For a network using LoRaWAN technology to have a greater range, these essential factors must be taken into account:

Ensure that the Tx and Rx antennas can be seen optically from one another. To establish optical sight between both the antennas, raise the altitude of the antennas. Antennas should always be used outdoors rather than indoors.

Avoid impediments in the surrounding area of the antenna while using conventional rod antennas, which concentrate energy in the horizontal plane. Additionally, mounting them on a pole always seems to be preferable to mounting them on the structure’s side. If the antenna is deliberately placed, and the highest defined antenna strength and antenna polarization are effectively tuned to one another, the range should increase.

Utilize high-quality cables and N-type connections (LMR 400 or its equivalent, with a loss of less than 1.5 dB per 100 m). This connection between both the system and the antennas should be as brief as feasible in order to minimize losses in the connecting medium.

4) Installation close to other radio apparatus

Avoid intense disturbances, such as those from nearby GSM or UMTS transmitters. Always read the manufacturer’s instructions before using them (commonly found under the term “co-localization”).