Why Is My Helium Sync Stuck? – No Rewards in a Week?

Helium not fully syncing is a common situation people encounter when mining, which can affect your HNT token earnings.
Post Views: 68 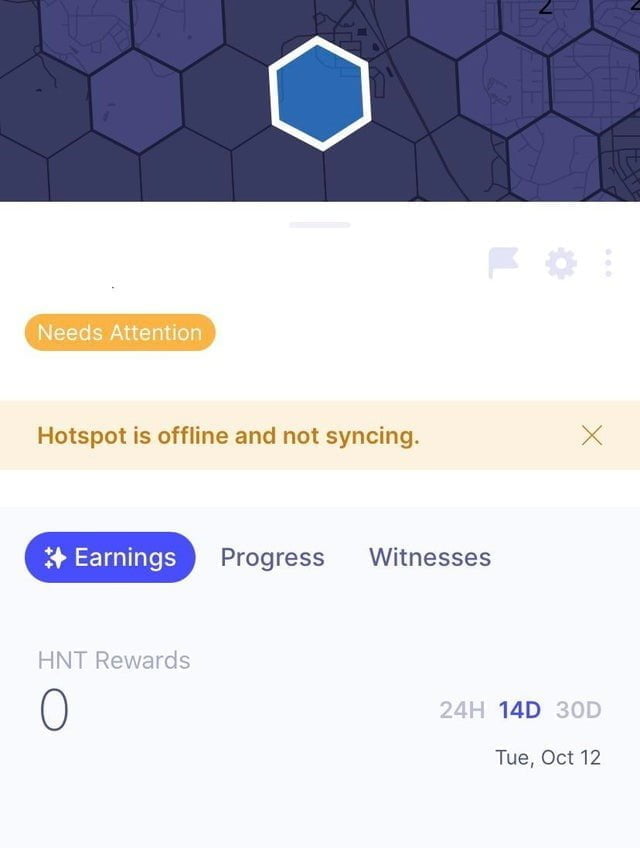 Why sync? What is it syncing?

The official website for Helium claims that hotspots have changed into light hotspots. All hotspots are still synchronizing the blockchain because it is still in the transitional phase. The blockchain will eventually be taken out of every hotspot, according to the proposal.

Hotspots with firmware that isn’t aware of the light hotspot activities are being sent from manufacturers as a result of this period of transition. Therefore, until the blockchain catches up to block 1,350,664, the initial setup will still require the blockchain to sync. The variable was configured to flick hotspots to light hotspots during that block.

They will eventually stop syncing and their daily data consumption will drop dramatically once the blockchain is taken out of the light hotspots.

Reminder: The Helium Explorer’s Offline / Syncing / Relay state is inaccurate and has a significant latency. To get the most recent status of your hotspot, you can only rely on IN HOTSPOT software (Helium Hotspot Utility, Diagnoser, etc.). There will be a delay in any additional centralized systems (Helium Explorer, etc).

why is it important for the network nodes to be in sync?

The distributed ledger that powers the Helium network is called the Helium Blockchain. It is used to hold information about the helium network and to record transactions. The network nodes must be in synchronization with one another for proper operation. They won’t be able to perform transactions or access data otherwise.

How to diagnose a sync stick?

There are a few ways to check if your helium blockchain is genuinely trapped if you’re unsure.

-First, look at the “Last Block Synced” time on the Helium Wallet page. Your sync can be stuck if it hasn’t changed in a long.

You should now know how many blocks you have currently. If this value doesn’t rise with time, your sync is probably stuck.

-Finally, to see whether anyone else is experiencing the same problem, you can also check other community sites like Reddit or the Helium Discord channel.

Why does Sync Stuck happen in Helium?

-The machine running the helium node software has a very sluggish or no internet connection. This may result in a lengthy or even stalled blockchain sync procedure.

-The computer’s hard disk cannot accommodate the size of the helium blockchain. Sync Stuck may also result from this.

How to solve the problem?

Don’t worry if you’ve discovered that your helium blockchain is indeed stuck. There are several fixes you can make.

Try rebooting your computer and accessing the helium wallet once more as a first step. This might get the sync going.

Try removing the blockchain data directory and resyncing from scratch if that doesn’t work. Depending on your operating system, there are different instructions for doing this; nonetheless, you can find them here:

-Confirm that your PC is online and that the connection is swift.

-Try using the “mempool clear” command to clean the mempool.

-Try performing the “resize” command to enlarge the size of your blockchain database.

-If all else fails, you can try using the “reset” command to reset your helium node. Your local copy of the blockchain will be reset after doing this. It will take some time to download the blockchain once more.

If it doesn’t work, try forcing the Helium app to close using the Task Manager (on a PC) or Activity Monitor (on a Mac). After that, test if relaunching it fixes the issue. The next step is to remove your old blockchain data and resync from scratch if you’re still having issues. How to do it:

When you restart the Helium program after deleting these folders, it will begin syncing from scratch. Even though it could take some time, you should soon be able to function again.

The problem of Helium blockchain synchronization stuck often occurs in actual use, and it is cumbersome and difficult to solve. If the above measures do not work, we recommend the most effective method – a light hotspot.

What is a Light hotspot?

Hotspots have been keeping a copy of the Helium blockchain on hand since the Helium Network initially went live three years ago. In addition to participating in Proof-of-Coverage activities, Hotspots also perform a variety of other significant tasks.

Hotspots have struggled to keep up with the Network’s rapid expansion to over 949K+ deployed Hotspots, including constantly syncing and storing the blockchain data on the device. The Helium Network developed Light Hotspots as a software update that does away with the requirement for all Hotspots on the Network to retain blockchain data in order to address this issue.

Hotspots on the Network will function more smoothly and effectively with this update.

Free software updates are known as Light Hotspots. Without your involvement or the need for extra hardware, all Helium-compatible Hotspots will transform into Light Hotspots once they are active. What’s best? The days of Hotspot syncing difficulties and reported statuses will be passed once they are active because they will (over time) require a fraction of the data that they do now.

What does a light hotspot bring to me?

At present, all DUSUN hotspots have been upgraded to light hotspots, so consumers can buy with confidence. The DSGW-210B is a full 8-channel Indoor Gateway, based on the LoRaWAN protocol, with built-in Ethernet connectivity for a straightforward setup. Additionally, there is an onboard Wi-Fi setup (supporting 2.4 GHz/5GHz Wi-Fi) that allows it to be easily configured via the default Wi-Fi AP mode. With its industrial-grade components, it achieves a high standard of reliability. This is the most popular full-featured version of helium miner, it has a high yield, can get HNT faster, and shorten the payback period.

In response to customer needs, a Light version of the helium miner was introduced with lower hardware costs. DSGW-090B is a robust 8-channel indoor LoraWAN® Gateway. Adopting the SX1302 LoRa chip and secure crypto chip, DSGW-090B provides high-efficiency and reliable connection. DSGW-090B has a line of sight up to 15 km and can cover about 2 km in an urbanized environment, which can cover larger areas and provide connectivity to more than 2000 nodes.

For Helium miners, the most important thing is HNT token income, which is reflected in the following three aspects:

The Light Hotspot software update may revive your Hotspot and enable it to mine HNT if it was relayed or had syncing problems.

As a result of Challenger Updates, rewards will change.

Hotspot mining will be more dependable.

Since a predetermined amount of HNT is distributed to Hotspots each epoch, it is projected that as more Hotspots go online and begin mining and as more Hotspots are added every day, the average earnings per Hotspot will decline. Earnings, however, are anticipated to be far more steady and reliable.