A Comprehensive Guide to Long-Term Evolution(LTE)

This comprehensive guide to LTE provides an in-depth overview of the technology and its key components, giving you all of the information you need to understand how it works.
Post Views: 38 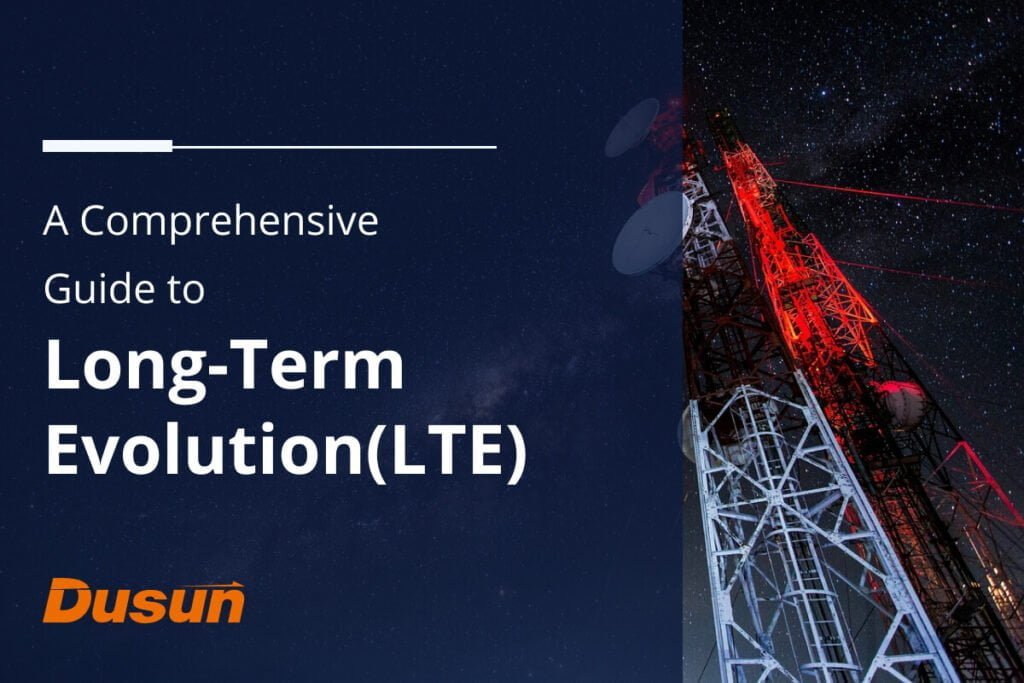 Long-Term Evolution (LTE), developed by 3GPP, is a term for the cellular network that defines a standard for mobile devices to provide higher bandwidth, lower latency, and higher data services than 3G.

At Dusun, we are focused on the commercial and industrial use cases of LTE-M, LTE CAT4, and LTE CAT1, as our customers are mainly distributed across industrial, home automation, and medical landscapes. So the remainder of this article discusses these three UE categories’ meaning in that context.

What is CAT M1

And as a complementary technology to NB-IoT, LTE-M operates on a 1.4 MHz spectrum with a transmit power of 20 Bm. In addition, it provides faster upload and download speeds of 1 Mbps and lower latency of 10 to 15ms.

CAT M1 devices have significant advantages for the cellular network, IoT developers, and customers. In addition to its ability to manage low to medium data transfers, including voice-over IP and firmware and software updates.

LTE-M has another significant advantage: LTE-M is backward compatible with existing LTE networks, which means carriers do not need to spend money to create the new station.

Thanks to its Low power consumption capability, it enables maintenance costs drastically to decrease compared to other cellular connectivity options

What is LTE CAT1

CAT1 is an LTE UE Category designed explicitly for Machine-to-Machine(M2M) and IoT applications. To save power and cost for large-scale or long-range IoT system, bandwidth and communication demand is decreased.

LTE CAT1 supports 10 Mbit/s downlink speed and 5 Mbit/s uplinks. And it is best suited for use cases dependent on both high-speed data transmission and the reliability of the 4G network.

CAT1 is the only fully-functional cellular IoT option at the moment, which is used to create the link between IoT devices and the existing LTE networks in early attempts.

What is LTE CAT4

To provide this performance, the LTE CAT4 utilizes the simplest MIMO configuration: the 2×2 MIMO(2 TX antennas and 2 RX antennas). And it is best suited for IoT applications requiring higher throughputs and more bandwidth.

Which is Best For Your Application

Dusun is a leader in developing and manufacturing IoT Gateway you need to have to get ahead in your solution. We provide various products using 4G LTE technology like CAT1, CAT4, and CAT M1 for different usage scenarios.

LTE CAT4 is the most common and simpler high-speed LTE UE category that supports uplink data rates up to 50Mbps and downlink data rates up to 150Mbps which enables applications like high-quality video surveillance, routers, etc. To provide this performance, the LTE CAT4 utilizes the simplest MIMO configuration: the 2x2 MIMO(2 TX antennas and 2 RX antennas). And it is best suited for IoT applications, which require higher throughputs and more bandwidth.
CAT1 is an LTE UE Category specifically designed for Machine-to-Machine(M2M) and IoT applications. In order to save power and cost for large-scale or long-range IoT system, bandwidth and communication demand is decreased. LTE CAT1 supports a maximum of 10 Mbit/s downlink speed and 5 Mbit/s uplinks. And it is best suited for use cases that are dependent on both high-speed data transmission and the reliability of the 4G network.
CAT M1 devices have significant advantages for the cellular network, IoT developers, and customers. In addition to its ability to manage low to medium data transfers, including voice-over IP and firmware and software updates, LTE-M has another significant advantage that LTE-M is backward compatible with existing LTE networks, which means carriers do not need to spend money to create the new station. Thanks to its Low power consumption capability, it enables maintenance costs to decrease drastically compared to other cellular connectivity options.

PTCRB: is a pre-requisite to carriers such as AT&T, T-Mobile, and Canadian networks; PTCRB is used for testing GSM/UMTS and 4G devices.

AT&T has approved the DSGW-040 from Dusun for operating on its network, and customers can find DSGW-040 in the approved product list on the AT&T website.

Our LTE Gateway is specifically suitable for healthcare scenarios. In addition to providing multiple frequency ranges with low latency and a higher data rate, it is capable of exchanging information in a more secure approach.

As intelligent electric and water meters grow in popularity, utility providers can benefit from the capabilities of LTE gateways, which can forward the information from the smart device to the cloud, and track water and electric use within businesses, apartments, and other households.

Companies can then bill based on the amount of water and electricity used or time-of-day, or reward households and enterprises for conserving resources.

LTE-M IoT Gateways powered by Dusun support connecting to the AT&T LTE-M mobile network and other IoT protocols, such as Zigbee 3.0, BLE, and LoRa.

Thanks to its CAT 1 feature, DSGW-010 is flexible and effective across broad ranges. The reason is that most cellular carriers have created an extensive 4G network that devices can access.

DSGW-010 can also make life easier and more efficient for farmers on the farm. Because it is easy to use, with the limited configuration required, fully scalable, reliable, and low-cost.