What is the system-on-module (SoM), and how to choose it？ 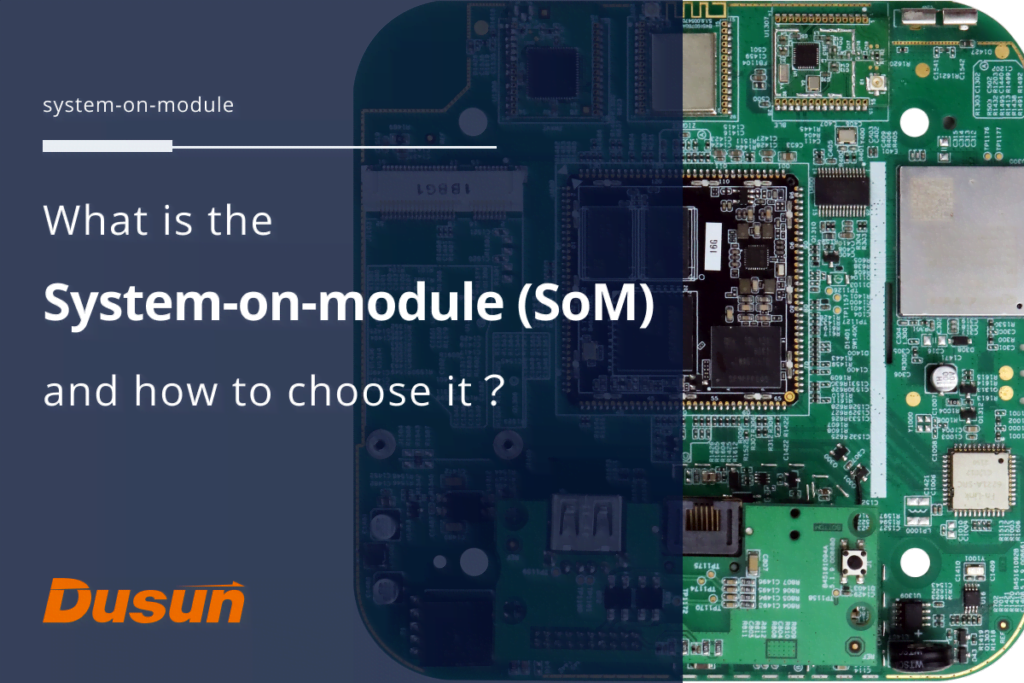 What is SoM (System-on-Module)？

A System-On-Module (SoM) is a single-board computer that may be plugged into a carrier board to expand the system. A System-On-Module is another term for the same thing. It refers to a computer or system bundled into a single module. By simply picking an alternative SoM module from the same pin-compatibility family, the soM-based design allows more scalability.

The SoM can be replaced or improved without replacing the carrier board. SoM offers a plug-and-play benefit. The SoM and carrier board supply the entire system; they typically incorporate the display, connection, GPIO, and other subsystems in a single computer module.

Why choose SoM for my project?

SOM enables developers to achieve design breakthroughs that reduce not only time to market but also costs. Developing an embedded system can be a time-consuming process that necessitates the design and fabrication of custom circuit boards. SOM reduces the number of steps required to complete a procedure. Simply select a SOM that meets your needs and integrate it into the end system, and you’re ready to go.

The modular design not only enables high-volume deployments but also simplifies product lifecycle management and lowers bill of materials (BOM) costs. SOM is worth investigating whether you are interested in software, hardware, or even AI development.

Edge computing can be used by software developers to process data locally and without latency. SOM does not necessitate extensive hardware knowledge and provides a comfortable and intuitive design environment. SOM’s easy-to-configure, highly flexible sensors will appeal to software developers working on vision applications. To save design time, the best SOMs includes built-in drivers and other software.

Hardware developers must move as quickly as possible to production, focusing limited resources on tasks with the most significant impact. They get the performance and flexibility of Field Programmable Gate Arrays (FPGAs) without the difficulties of PCB design and integration with SOMs. This enables them to complete projects on time and within budget.

AI developers require systems that provide efficient, high-performance performance without requiring them to be hardware experts. Fortunately, thanks to pre-built applications from system providers on the best modules, they can select a SOM that provides the computing power they require while retaining the flexibility to easily obtain AI models.

Where can SoM be applied

The cutting-edge security camera system fully utilizes the advantages of video analysis, and SOM has contributed. Video analytics-enabled security cameras use machine learning to classify and understand the transactions they see, providing an accurate stream of data in real-time. This would not be possible without edge computing and without cameras and other devices that analyze information on-site.

The modern economy relies on machine vision for everything from inventory inspection to signature recognition to defect detection. Machine vision requires embedded systems that can both analyze data in the field and provide configurable sensor capabilities. SOM helps developers leverage machine vision at scale while keeping costs low.

Smart cities use ubiquitous sensors to collect data to provide decision makers with the in-depth information they need to keep communities functional and alive. SOM primarily powers these sensors, helping city officials keep track of everything from utilities to traffic in real-time without missing a single nuance.

What factors need to be considered when choosing the right SoM?

The number of peripherals and the constraints associated with them is also important considerations when selecting a SOM. Hardware developers must understand which peripherals, such as 4G, GPS, card readers, and so on, will be present on the carrier board before selecting a SOM.

Because both Intel and ARM are market leaders in the processor market, comparing software availability and toolchains is difficult. ARM-based devices have the advantage of running mobile operating systems such as Android and Linux. Intel-based devices have the advantage of being able to run virtually any operating system that can be run on a standard desktop PC, including Windows and Linux.

Android/Windows/Linux: Operating systems are critical in the development of smart devices. Building SDKs and supporting multiple hardware variants are heavily reliant on how we manage the BSP (board support package) used to run the system. Available peripheral drivers and module bring-ups are critical factors in selecting the best fit operating system for the embedded system.

The design team should consider the SoM’s lifetime, as manufacturers typically support a product for a set period of time. Because the product is partially dependent on a specific SoM, SoM must be included in obsolescence management criteria.

One of the most important factors for embedded design teams is the budget for building the IoT or smart device, as it affects the final cost of the product. It goes without saying that decision-makers should keep the cost of SoM in mind when preparing Bills of Materials (BOM).

The development of embedded systems will move toward SoMs. The examples given above are just a tiny sample of the numerous applications available. Home automation is a top priority for many people, especially during the pandemic, and the majority of these embedded devices are made with SoM.

For effective productization, DUSUN offers its own line of SoM modules that come with a full software package that includes device drivers and supports several operating systems. DUSUN’s SoM may be tailored to meet the needs of product development and supports the SDKs of many platforms. Our system-level modular services and solutions enable customers to start developing their software before it is manufactured and help with quick marketing.